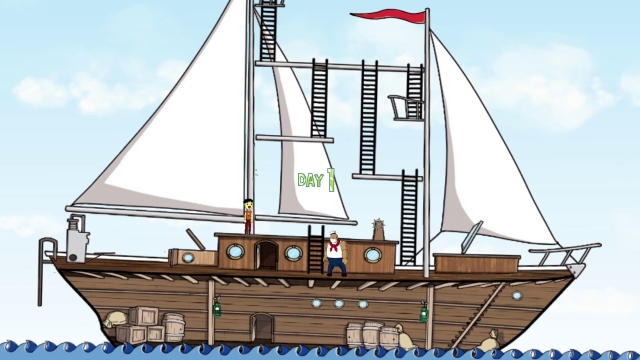 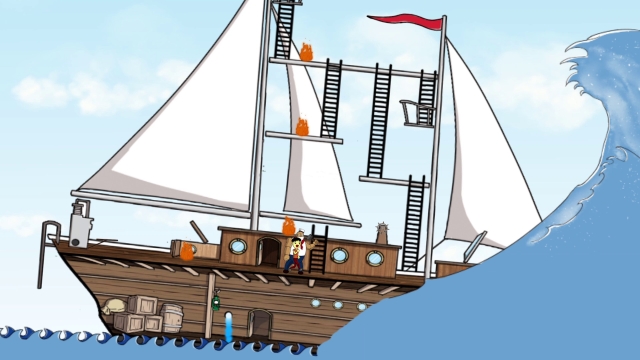 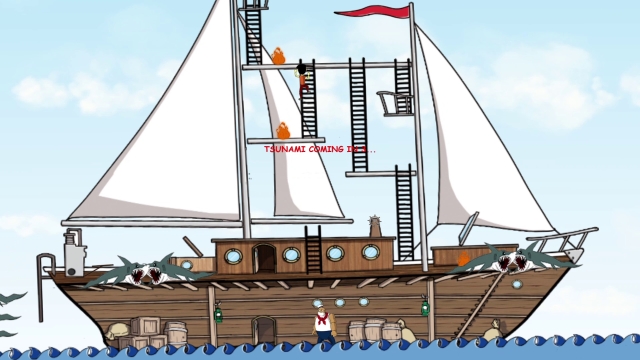 A cooperative 2-players game made for Global Game Jam 2015, whose theme was "What do we do now?".

In this game, two players play as two sailors, on their ship, lost in the ocean. They must cooperate to survive an entire week before they get to land. Their journey will be tough: they will have to face tsunamis, flocks of hungry sharks, flooding and even fire!

The two characters are very different, and they have different roles from each other.

The first character is a young, tiny, thin and lightweight helmsman. He will use the rudder to tilt the ship in order to get rid of sharks that are jumping in. Thanks to his agility and speed, he will also run and climb ladders to reach fire to put it out. However, he's not very strong, but luckily he's not alone!

The second character is an old, big, fat, heavy sea wolf. When a tsunami is coming, he will hold the helmsman to avoid him to fly away because of his light weight! Thanks to his strength, he will go down into the hull of the ship to repair holes that let water come inside. Also, he will use the water pump to get rid of water inside of the ship.

This game has been done in 48 hours by a team of 7 people:

For this game I worked on the following tasks:

INSTRUCTIONS TO PLAY: During the game jam we preferred to use all the time to implement mechanics and tune parameters to balance the game. Unluckily this means we didn't make a tutorial, so keep reading for instructions on how to play the game.